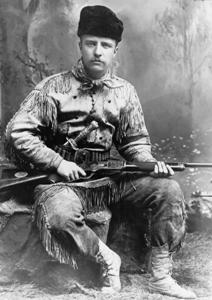 It is hardly necessary at the present day to enter a. plea for athletic exercise and manly outdoor sports. During the last twenty-five years there has been a wonderful growth of interest in and appreciation of healthy muscular amusements; and this growth can best be promoted by stimulating, within proper bounds, the spirit of rivalry on which all our games are based. The effect upon the physique of the sedentary classes, especially in the towns and cities, has already been very marked. We are much less liable than we were to reproaches on the score of our national ill health, of the bad constitutions of our men, and of the fragility and early decay of our women.

There are still plenty of people who look down on, as of little moment, the proper development of the body; but the men of good sense sympathize as little with these as they do with the even more noxious extremists who regard physical development as an end instead of a means. As a nation we have many tremendous problems to work out, and we need to bring every ounce of vital power possible to their solution. No people has ever yet done great and lasting work if its physical type was infirm and weak. Goodness and strength must go hand in hand if the Republic is to be preserved. The good man who is ready and able to strike a blow for the right, and to put down evil with the strong arm, is the citizen who deserves our most hearty respect. There is a certain tendency in the civilization of our time to underestimate or overlook the need of the virile, masterful qualities of the heart and mind which have built up and alone can maintain and defend this very civilization, and which generally go hand in hand with good health and the capacity to get the utmost possible use out of the body. There is no better way of counteracting this tendency than by encouraging bodily exercise, and especially the sports which develop such qualities as courage, resolution, and endurance.

The best of all sports for this purpose are those which follow the Macedonian rather than the Greek model: big-game hunting, mountaineering, the chase with horse and hound, and wilderness life with all its keen, hardy pleasures. The hunter and mountaineer lead healthier lives—in time of need they would bake better soldiers—than the trained athlete. Nor need these pleasures be confined to the rich. The trouble with our mean of small means is quite as often that they do not know how to enjoy pleasure lying at their doors as that they cannot afford them. From New York to Minneapolis, from Boston to San Francisco, there is no large city from which it is impossible to reach a tract of perfectly wild, wooded or mountainous land within forty-eight hours; and any two young men who can get a month’s holiday in August or September cannot use it to better advantage than by tramping on foot, pack on back, over such a tract. Let them go alone; a season or two will teach them much woodcraft, and will enormously increase their stock of health, hardihood, and self-reliance. If one carries a light rifle or fowling-piece, and the other a fishing rod, they will soon learn to help fill out their own bill of fare. Of course they must expect to find the life pretty hard, and filled with disappointments at first; but the cost will be very trifling, and if they have courage, their reward is sure to come.

However, most of our people, whether from lack of means, time, or inclination, do not take to feats of this kind, and must get their fun and exercise in athletics proper. The years of late boyhood and early manhood—say from twelve or fourteen to twenty-eight or thirty, and often until much later—are those in which athletic sports prove not only most attractive, but also most beneficial to the individual and the race. In college-and in most of the schools which are preparatory for college rowing, football, baseball, running, jumping, sparring, and the like have assumed a constantly increasing prominence. Nor is this in any way a matter for regret. Of course any good is accompanied by some ill, and a small number of college boys, who would probably turn out badly anyhow, neglect everything for their sports, and so become of little use to themselves or anyone else. But as a whole college life has been greatly the gainer by the change. Only a small proportion of college boys are going to become real students and do original work in literature, science, or art;

Now, athletic sports, if followed properly, and not elevated into a fetish, are admirable for developing character, besides bestowing on the participants an invaluable fund of health and strength. In each of the larger colleges there are from fifty to a hundred men who, on the various class and college crews and ball teams, or in the track and gymnasium games, compete for the different championships; and for every one such man who actually competes there are five or ten who take part in the practice games, train more or less, and get a great deal of benefit from the work. The careful system of measurements which have been taken at Harvard shows a marked improvement in the physique of the men even during the last ten years; and which is more important shows that this improvement is, if anything, more marked in the case of the average man than in that of the picked champions.

The colleges contain but a small proportion of the men interested in amateur athletics, as can be seen by the immense number of ball clubs, rowing clubs, polo clubs, hunt clubs, bicycle clubs, snow-shoe clubs, lacrosse clubs, and athletic clubs proper which are to be found scattered among our cities and towns. Almost any man of sedentary life who wishes to get exercise enough to keep him in vigorous health can readily do so at one of these clubs; and an increasing proportion of our young men are finding this out and acting accordingly. More than one of our most famous .athletes originally took to athletics for his health ; and, on the other hand, be it remembered always that the sports which prove most beneficial bodily to a man are those which interest and amuse him. If he belongs to a rowing club or baseball nine, the eagerness and excitement of a contest with a rival association spur him on to keep his body in good condition ; and, as with the college athletes, there are scores of outsiders, whom these championship contest attract, and whose love for athletics is increased thereby, for every individual contestant who directly participates in them. It is needless to say that under the head of manly sports I do not include pigeon-shooting ; and still less rabbit-coursing, or any other game where the man does nothing but look on.

Already this awakening of interest in manly sports, this proper care of the body, have had a good effect upon our young men; but there are, of course, accompanying dangers in any such movement. With very few exceptions the man who makes some athletic pursuit his main business, instead of turning to it as a health-giving pastime, ceases to be a particularly useful citizen. Of course I do not refer to the man who act as trainers and instructors at the different colleges and clubs ; these perform a most useful and honorable function, and among them several could be named who have rendered as high service as any men in the community.

But the amateur athlete who thinks of nothing but athletics, and makes it the serious business of his life, becomes a bore, if nothing worse. A young man who has broken a running or jumping record, who has stroked a winning club crew, or played on his college nine or eleven, has a distinct claim to our respect; but if, when middle-aged, he has still done nothing more in the world, he forfeits even this claim which he originally had.

It is so in an even more marked degree with the ” professional” athlete. In America the difference between amateurs and professionals is in one way almost the reverse of what it is in England, and accords better with the ways of life of our democratic community. In England the average professional is a man who works for his living, and the average amateur is one who does not; whereas with us the amateur usually is, and always ought to be, a man who, like other American citizens, works hard at some regular calling,-it matters not what, so long as it is respectable,-while the professional is very apt to be a gentleman of more or less elegant leisure, aside from his special pursuit.

The mere statement of the difference is enough to show that the amateur, and not the professional, is the desirable citizen, the man who should be encouraged. Our object is to get as many of our people as possible to take part in manly, healthy, vigorous pastimes, which will benefit the whole nation; it is not to produce a limited class of athletes who shall make it the business of their lives to do battle with one another for the popular amusement. Most masterful nations have shown a strong taste for manly sports. In the old days, when we ourselves were still a people of backwoodsmen, at every merrymaking there were sure to be trials of skill and strength, at running, wrestling, and rifle-shooting, among the young men. We should encourage by every method the spirit which makes such trials popular; it is a very excellent revival of old-time American ways. But the existence of a caste of gladiators in the midst of a population which does not itself participate in any manly sports is usually, as it was at Rome, a symptom of national decadence.

The Romans who, when the stern and simple strength of Rome was departing, flocked to the gladiatorial shows, were influenced only by a ferocious craving for bloody excitement; not by any sympathy with men of stout heart and tough sinew. So it is, to a lesser extent, today. In baseball alone, the professional teams, from a number of causes, have preserved a fairly close connection with non-professional players, and have done good work in popularizing a most admirable and characteristic American game; but even here the outlook is now less favorable, and, aside from this one pastime, professionalism is the curse of many an athletic sport, and the chief obstacle to its healthy development. Professional rowing us under a dark cloud of suspicion because of the crooked practices which have disgraced it. Horse-racing is certainly not in an ideal condition. A prize fight is simply brutal and degrading. The people who attend it, and make a hero of the prize fighter, are—excepting boys who go for fun and don’t know any better—to a very great extent, men who hover on the borderline of criminality; and those who are not are speedily brutalized, and are never rendered more manly. They form as ignoble a body as do the kindred frequenters of rat-pit and cock-pit. The prizefighter and his fellow professional athletes of the same ilk are, together with their patrons in every rank of life, the very worst foes with whom the cause of general athletic development has to contend.

The collected work of Theodore Roosevelt and other major American journalists is now freely available at The Archive of American Journalism.