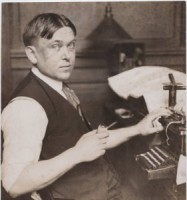 In the late thirties of the last century there lived in the town of Athens, Ga. a skillful and enlightened surgeon named Crawford W. Long. Dr. Long’s service was in great demand all over the South, and he spent most of his time travelling from town to town performing operations. He did his work well and he saved many a poor unfortunate from death, but he always felt that there was something lacking in his art, for that was before the day of anesthetics, and the operating room was still a place of barbarous agonies. Why shouldn’t it be possible to find some benign drug that would render patients unconscious, and so make it possible to relieve them without torturing them? Dr. Long pondered the problem as he went his rounds, and finally, in 1841, he hit upon the drug that he was seeking. It was sulphuric ether.

But he was a cautious and modest man, and it was some time before he ventured to test his discovery in practice. First of all, he tried the effect of ether upon animals, then upon himself, and then upon other healthy persons. It was not until March, 1842, that he felt himself ready to use it in his actual work.

A man named James Venable, a Georgian like himself, was the first patient to enjoy its unspeakable blessings. Venable had a couple of bad tumors on his neck and came to Dr. Long to have them removed. The latter explained to him the effects of ether, but also pointed out to him the risks attending its use.

Venable decided to take those risks, and so on March 20, 1841, he inhaled Dr. Long’s ether and one of his tumors was cut out. From first to last he felt not a single twinge of pain. Three weeks later he inhaled ether again, and the second tumor was removed. A month more and he was completely well.

The rest of the story belongs to medical history. Dr. Long revealed his discovery to the other surgeons of his town, and in a short while all of them were using ether in their operations. The news spread to the North, and after awhile other surgeons began to claim the discovery. The honor of having made it is commonly accorded today to a Bostonian, but that is another story. The matter which concerns us here is the bill sent to Venable by Dr. Long. It was found years afterward among the good doctor’s papers. Here it is:

But let the fee table of the learned physicians and surgeons tell its own story. Here it is, in full, “as ordered by the Council of the Faculty”:

First visit in any case of sickness: $2 to $20
Each subsequent visit: 2 to 5
First consultation visit: 5 to 100
Each subsequent consultation visit: 5 to 100
Single visit and advice in special cases, where the physician is not the regular attendant: 5 to 25
Distant visits, for every mile over two miles in addition to the usual charge, night visits double: 1 to 5
Night visits, between 10 PM and 7 AM: 5 to 10
Detention with patient all night: 10 to 100
In case of several patients in one family, charge the visit to the others each one-half
the amount charged to the first: 2 to 10
Advice at physician’s office, night double: 2 to 10
Advice anywhere except at office: 2 to 10
Advice by telephone: 2 to 10

The Income of A Rockefeller

If it true enough, of course, that the great majority of physicians and surgeons collect no such fees. Nine tenths of the general practitioners of Baltimore, in all probability, still charge but $1 each for house visits—and are lucky if they get the money. But the fee table of the Faculty, if it lacks the force and effect of law, at least shows how the ambitions of the medical gentlemen are mounting. The maximum fees fairly touch the sky. They make it possible for a member of the Faculty, if the chance offers, to demand fees that would make a Swiss hotelkeeper hide his head in shame, and still escape trial by his peers for grossly and indecently oppressing his patients.

Read more from H.L. Mencken and 12 other major American authors at The Archive of American Journalism