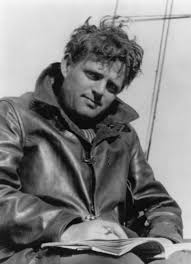 Jack London Writes Entertainingly of His Impressions While at the Ringside

A big, dark male [James J. Jeffries], hairy of chest and body, in one corner; in the other corner a big, light male [Gus Ruhlin], smooth of skin and serious of face; overhead an artificial sun, and all around ten myriads and more of spectators; problem—which male, dark or light, and for a king’s ransom, can beat the other into insensibility or helplessness?

So the fight summed itself up ere it had begun. But the big, light male was serious of face, too serious, and he seemed too little the animal to go up against the big, dark male. There was no hair on his body, no hair and an obvious lack of sheer humility and grit.

And when these two young giants, both in the fairest prime, came together, the light man it was who first cried protest to the referee. Now, it is not good to cry protest. It does not seem in keeping with the game. It is hard to imagine the animal in the wild spending strength and breath in crying protest to the jungle powers, and it is hard to reconcile oneself to the human crying protest when that human had been elected to play the animal in the wild.

But the light male cried aloud and looked still more serious, and ran away backward till a fear and a panic dawned in his eyes. And the dark male smiled—not viciously, not insolently, not vaingloriously, just simply smiled and smiled, and fought. He was dark of skin, and he remained dark. It seemed natural the thing he was doing. But the fair skin of the light male flushed and blushed to a crimson tide which seemed to mark his conduct as unnatural. It was patent that one was a fighter, that the other was not; and it was patent that one must win, that the other could not.

So they came together, these big-thewed men, with great muscles swelling and bunching under satiny skins, quite in contrast to the clever little men who had preceded them. And when they missed, and chest met chest, the sound of the impact was like that of young bulls in rutting combat.

The dark man spat blood from his mouth and smiled, and the blood ran down his chin. And the blood, conveyed by the gloves, marked lightly the bodies of both men with crimson splashes. And the skin of the light man flushed and flushed and beaded with perspiration. The strength went out of his blows, and he fell to the floor before a blow which could not warrant such a performance. The time-keeper shouted off the seconds, and the crowd yelled in exultation at the sight of the dying gladiator. But the gladiator did not die. It was disappointing. He would not play the game out as animals are accustomed to play it out. He came to his feet and struggled feebly about, to later retire to his corner and calmly sit down while his seconds tossed up the barbaric emblem of defeat—the sponge.

But it was good to see, the crowd, the spectacle, the artificial sun, and the second of the preliminaries. And under this veneer of a thousand years of culture, I, for one, found that the endless savage centuries still lived. I, who had come to note the blood cry of the crowd, came to myself with sickening consciousness to find that my voice, too, was issuing forth with lusty joy and thrilling abandon. One does not break lightly from his heritage. When man smote man and the body blows smacked loud, and smiter and smitten sighed, the one with the vehement outgoing breath and the other from the checked intake—why, then I would find myself lifting up from my seat, breath suspended, myself and the world forgotten, utterly merged in the struggle before me.

In one lucid interval I chanced to note that the crowd wanted blood more thirstily than did the two men in the ring. The crowd was clamorous for blood; but the fighters had more the end of the king’s ransom in mind. Another thing I noted. In the clinches the dark man hung his weight upon the other’s neck and shoulders, and calmly and without even protest in his muscles, waited the referee to separate them. On the contrary, the light man supported the unwelcome weight, and both his body and mind were in constant protest and anxiety. And when they broke away he edged backward, while his opponent held ground like a rock. Also, the opponent, the dark man, freely and frankly spat out the blood from his cut mouth, instead of striving to hide and swallow it as other fighters have been known to do.

It was a picturesque scene, this twentieth century arena, this machine-age gladiatorial contest. The house in darkness and the ring a white blaze of light; the tick-tick of the telegraph keys, the monotonous dictation to the stenographers of each blow and parry and maneuver, and the excited voices of glad men sure of their winnings; and under the clustered arc lamps, in the blinding glare, the two battling elemental males, and around all the sea of faces stretching away and fading into the darkness— a vast crowd, eager to see two men beat and batter each other into pulp, or, rather, a vast crowd divided in its interest as to which man should beat and batter the other into pulp.

“To be a fair stand-up boxing match”—so begins the Marquis of Queensberry rules. To stand up is the point of the game, to stay on one’s feet, to not lie down, to not run away, to hold a twenty-foot ring of earth against the world. This is the point of it and the spirit; and when all is said and done, the prize fighter, big-muscled and brutish and barbarous is a finer thing than a decadent. There is a promise in the one; it is excessive, elemental masculinity, but from it noble strength can be refined. But in the other there is no hope; nothing but disease and insanity and death can proceed from the weak-kneed and emasculated. It is vastly better to be elemental than decadent. And for those who to-day are healthy and strong and yet recoil from a prize fight, it would be well for them to recollect that they have come down from the loins of elemental men; that the decadent has no issue.

We know the brutality of the battlefield. Pink teas are preferable to many. But it were likewise well to remember that battlefields make pink teas possible; that for the poet that sings there is a soldier that fights, and were there no soldier fighting there would be a poet wailing.

Well, I was not decadent, and I saw the fight, and I must confess to one disappointment, a grievous disappointment. Why, O why, did this man who elected to play the animal, why did he not play it out? It was inconsistent. It is unforgivable.

The historic works of Jack London and other major journalists are freely available from The Archive of American Journalism: www.historicjournalism.com