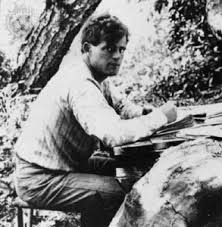 Savors of Methods of Highwaymen

Effort Seems to be to Force Other Side to Surrender

Avoidance of Belligerents to Meet in Close Quarters

Always Dodging From the Bullets

Of Course Some Men Fall from Shell and Shrapnel

Possibilities and Not the Facts

Prediction as to Future Wars

Soldiers to Go on Vacations

WIJU April 30. — Long-range fighting is all very well. It is a splendid example of the extent to which man has risen above his natural powers and of the knowledge he has gained in flinging missiles through the air. It is a far cry from the sling with which David went into battle to the modern field gun; and yet, such is the paradox, the sling and hand-wielded weapons of David’s time, expenditure of energy being taken into consideration, were a hundred or so times more deadly than are the civilized weapons of today. That is to say, the hand-wielded weapons of that ancient day more simply and immediately accomplished the purposes they were made to serve than do the weapons of to-day. Which is to say, in turn, first, that the hand-wielded weapons killed more men, and, second, that they killed more men with far less expenditure of strength, time and thought. To kill men today requires harder work, harder thinking, harder inventing and longer time. The triumph of civilization would seem to be, not that Cain no longer kills, but that Cain has to sit up nights scheming how he is to kill.

Take the present situation on the Yalu. On one side of a river winding through a smiling valley are a lot of Russians. On the other side are a lot more Japanese. The Japanese wish to cross. They wish to cross in order to kill the Russians on the other side. The Russians do not wish to be killed, so they prepare to kill the Japanese when they attempt to cross. It is quite impersonal. They rarely see each other. To the right, on the north bank, are some Russians who are hammering away at long distance at some Japanese who are hammering back from the islands in the river. A Japanese battery on the south bank, to the right, begins flinging shrapnel into the Russians. Some four miles away to the left, at a diagonal course across the river, a Russian battery shells this Japanese battery with an enfilading fire. This will never do. From the Japanese center a battery shells the Russian battery. Nor will this do, either. From the Russian center a battery begins hurling shells clear over a high mountain at the battery on the Japanese center. The Japanese battery on the right ceases shelling the infantry on the Russian side. And so it goes, Russian left battery changing its fire to Japanese center, Russian center changing its fire to Japanese right battery.

Of course, on the other hand, a tactical advantage may have been gained by the Japanese which strengthened their strategic movement. Now, what is a strategic movement? A strategic movement, I take it, is the manipulation of men and war machinery in such a way as to make the enemy’s position untenable. An untenable position is one wherein the enemy must either surrender or be all killed. But no commander, unless he blunders, remains in an untenable position. He promptly gets out and hunts a position which is tenable. With much strategical labor he may be driven out of this, when he seeks a third. This continues, not indefinitely, but until he is cornered in the last of all tenable positions possible for him to occupy. Then the original proposition is made to him: Surrender or be killed. Of course, he surrenders. It is the same old time-worn proposition of the highwayman, “Money or your life.” A traveler so addressed is usually in an untenable position, and very naturally yields up his money. A nation, when its army is finally caught in an untenable position, does just the same thing, yielding up either fat provinces, commercial privileges or a money indemnity.

At least, this is modern warfare to the mind of this layman. Whether it be with small bodies of men, large armies or groups of armies, the strategic end is the same, namely, to get men and war machinery in an untenable position, where all will be destroyed if all is not surrendered. Here, for instance, on the Yalu, are two armies opposing each other. The Japanese army, by good strategy, may make the position of the Russian army untenable and compel it to fall back. On the other hand, a second Japanese army may land to the westward, somewhere on the gulf of Liao Tung, render untenable the position of a second Russian army, which it might encounter thereabouts, and thus, being on the flank of the Russian army on the Yalu, render the position of that army untenable.

But it is the long-range fighting which makes modern warfare so different from ancient warfare. In David’s time a General did not know that his position was untenable till both sides got together with the hand-wielded weapons, and then it was too late to retire, for the killing had commenced. The only men killed in twentieth century warfare, supposing a General to be neither a fool nor a blunderer, are those killed by accident. “Accident” is used advisedly. Bullets have their billets, but very few bullets have the billets intended for them, and very few soldiers see the proper billets when they are firing their bullets. The theory seems to be to pump lead at the landscape in such quantities that there are bound to be some lucky accidents. While so far as shell and shrapnel fire goes, it is the sheerest accident that a man is killed by such means.

Certainly, if men remained in the open, they would be killed. So would they be killed if they stood up and emptied their rifles at each other at five hundred yards. When shrapnel begins to fly they seek the reverse slopes, where they are quite safe. The ratio, in warfare, of men killed to energy expended is far, far smaller than that of men killed in house burglaries and holdups, the prize ring or the football field.

When warfare was simple and weapons were crude, the killing was on a large scale. The men got together at close range in those days, and the battles were decisive. Even up to nearly the close of the nineteenth century decisive battles were still possible. As late as the Civil War the enemy could be got on the run and chased off the battlefield. But that is not likely to happen in future years—at least in battles between civilized peoples. The beaten army will merely retire, and the victorious army will occupy the field at about the same rate of speed. It will have dislodged the enemy by long-range fighting, and the enemy, by the same long-range fighting, will prevent it from sweeping the field and making the defeat a crushing defeat. The beaten army’s position will have been rendered untenable, and it will retire to take up another and tenable position. Killing decided ancient warfare; the possibility of being killed decides modern warfare. In short, the marvelous and awful machinery of warfare of today, defeats its own end. Made pre-eminently to kill, its chief effect is to make killing quite the unusual thing.

When the machinery of warfare becomes just about perfect, there won’t be any killing at all. When one army gets the drop the other army will throw up its hands and deliver the valuables of which it is custodian. And in that day, the soldier boy’s farewell to his mother will be just about the same as his farewell today when he goes off for his summer vacation.

The work of Jack London and other American journalists is freely available at The Archive of American Journalism.