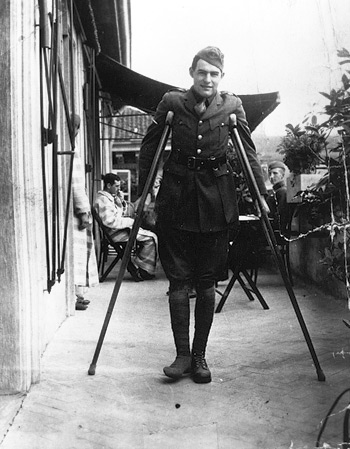 “Well, you might call it that,” replied William A. Whitman, 914 East Ninth Street. “I’ve driven a Blitzen-Benz at the Chicago, New York, Cincinnati and Los Angeles speedways for the last four years. You might call my race with Ralph Mulford at Reno a gas engine experience. Or the time the old boat got up to 111 miles an hour at the Sheepshead Bay track, or when Bob Burman was killed on the big board oval and I piled up right behind him. Those were gas engine experiences.”

“But have you had any military experience?” asked Lieutenant Cooter.

“Well, not regular military. I held a lieutenant’s commission in the Nicaraguan army in the war against Honduras in 1909. I was also a machine gun captain with Madero when he put Diaz out. First American to get into Juarez. Ask Pancho Villa, he knows. But none of those were very military. I had a commission in a couple of Central American revolutions, too. Nothing very military there, either.”

Lieutenant Cooter shoved a blank toward him. “Sign on the dotted line, man,” he said. “You’re too good to be true!”

“Well, I haven’t raced since September at Sheepshead Bay, and I may be a little out of practice, but you don’t have to go so fast in a tank. Besides, I’ve got a little difficulty with my teeth. But I sure want to sign for the tanks.”

Lieutenant Cooter has wired Washington requesting waivers as to the teeth.

Besides the regular quota of mechanics, barbers, motor car salesmen, bartenders and college students who applied yesterday, Maynard Bush, 38 years old, instructor in journalism at Polytechnic Junior College, made out an application. He will not be enlisted until next week, so he may arrange for a successor.

Letters were received from several Kansas University students who wish to enter. The Sigma Alpha Epsilon Chapter at Manhattan, Kas., wrote that several of its members wished to enlist. Telegrams and letters came throughout yesterday in regard to the tank service.

One hundred and sixteen men were accepted by Lieutenant Cooter during the week for immediate service. Nineteen were taken yesterday.