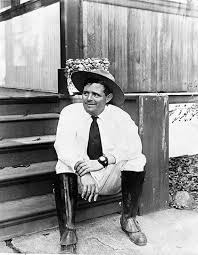 Tuesday was California Pioneers’ and Native Sons’ day, and many of the men who shot swiftly and sure in the “days of gold” were in evidence at the firing boxes where they watched how the young idea had learned to shoot. As for the young idea—the native sons—why many of them were doing the shooting, being members of the National Bund as well as sons of California. One of them, Otto Bremer of the California Schuetzen Club, appropriately celebrated the day by capturing the first bull’s-eye.

The knights of the target turned out in stronger force than on Monday morning. They have learned the best time for shooting when the light is most equal and the air calmest. But yesterday was a good all-around shooting day, for even in the afternoon the wind was nothing to speak of. As fast as they arrived the marksmen fell to in a business-like way, working steadily and seriously at the task of gathering in their fair share of the trophies arrayed in the Temple of Gifts.

C. M. Henderson’s remarkable score of Monday on the man target, by which he tied the world’s record, did not seem to deter the bold-hearted men of the Schutzen clubs. The shooting at that difficult target was fast and furious, and early in the day Mr. Ross made 73 and Mr. N. L. Vogel made 70. But this is out of a possible 80, and Mr. Henderson hugs his score card of 79 closely and laughs. But then there are other prizes to be won on the man target, valuable ones, too, and plenty of them.

The men are beginning to warm up as the Schützenfest wears old, and there was shooting all along the line. The glass shooting-boxes of the Honor Germania and Eureka targets were in use all day, though no record-breaking scores were made. M. F. Blasse of the Golden Gate Rifle and Pistol Club had his card punched to 64, followed by Ben Jones of the San Francisco Turner Schutzen Club with another 64, which was good but not quite so good. In case of a tie it will be found that the bullets in his targets will not have cut quite so closely as those in the targets of Mr. Blasse.

On the Standard American target D. M. McLaughlin, at an early hour, ran up 48 out of a possible 50.Mr. McLaughlin is one of San Francisco’s best shots and a jolly good fellow to boot W. W. Yaeger, the Colorado expert, followed with 46, being tied by H. M. Pope and J. Utschig.

Jacob Meyer of the Sacramento Helvetia Schutzen made the best 71 out of a possible 80 on the ring target, being tied both by T. R. Geisel of Massachusetts and H. M. Pope, a member of the New York Club.
And now that the ice is broken the “king shooting” has likewise begun, though none of the contestants has yet completed the requisite 200 shots.
S. C. Ross, first king of the National Bundes, hammered steadily away at the butts all day, getting into trim. William Hayes, the reigning king, was also present throughout the day, though he did not touch hand to rifle. It is to be hoped he recovers soon from his severe cold, else, as he said yesterday morning, he will not be able to compete.

Jolly Louis Ritzau, with his American flag mascot, was pretty much to the fore in pinging away at the targets; and it is whispered on the side that Mr. Faktor has an abiding faith in that same mascot.

The outlook is bright that the next Bundesfest will be heldat Denver. Sentiment seems to favor some point midway between New York and San Francisco, and upon the map Denver locates near that very point.

At first thought it appears strange that the best marksmen hail from the cities. Both the present and past kings of the Schützenfest are city men, Mr. Ross Hailing from Brooklyn and Mr. Hayes from Newark, N.J.; but on second thought it is not so strange. There are specialists in shooting as well as in anything else. What more natural than that the city man does his work at the target, the country man his at big game? The methods are so different; different faculties, different powers are called into play. Not that the target man would make a poor hunter; far from it; but, rather, being a crack at the target does not indicate that he would be equally good at big game. And vice versa, of course.

Out of the twenty men from Colorado some five or six use the palm rest, while the remainder hold their guns in the old-fashioned, ordinary way. They are hunters, these men—hunters primarily. They are used to drawing beads on big game at times when seconds and fractions of seconds count, and they have become expert without the aid of some of the intricate contrivances favored by their city brothers. None the less, they have well demonstrated their skill at the targets, these cool-eyed men from the mountains, and some dark horse may crop up among them to bear away the crown.

The works of Jack London and other major journalists are freely available from The Archive of American Journalism: www.historicjournalism.com