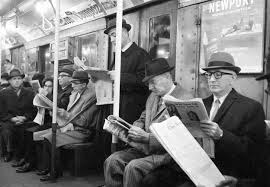 Milo’s party was the largest. The leaders passed one another. Clodius rode back to see what was going on. The temptation to make an end of his enemy was too strong for Milo to resist. To have hurt Clodius would, he thought, be as dangerous as to have made an end of him.

Here we have a flagrant misuse of “largest” for “larger,” an equally flagrant misuse of “one another” for “each other” and a split infinitive—all in one short paragraph. Is that paragraph from a newspaper, perhaps, or from a novel by Henry James or from an essay by some schoolboy? Not at all. It is from the eighteenth chapter of James Froude’s “Caesar” (p.336, Am. ed., 1879), one of the most notable historical essays in the English language—and from the pen of one of the greatest masters of that language produced by the nineteenth century.

And yet there are the three egregious blunders, sticking out like sore thumbs. Froude was discussing, not three or four or a hundred parties, but merely two, and, therefore, he should have spoken of Milo’s, not as the largest, but as the larger. The two parties had but two leaders, Milo and Clodius, and, therefore, in passing, those leaders must have passed each other and not one another. “Each other” implies two, as quickly appears when we insert the words missing from the phrase as it stands—thus, “each passed the other.” But “one another” implies more than two, as appears by the same process—thus. “one passed another.” In one case we speak of the other, showing that there is but one other; in the other case we speak of an other, showing that there is more than one. No need to dwell upon the harsh and barbarous split infinitive—“would, he thought, be.” Even college professors and editorial writers, those bold assassins of English, abhor the split infinitive.

Grammar As It Is Taught

But why prod in an old muck-heap? Why try to demonstrate the obvious fact that most of the great masters of English—not only Froude, but also Macaulay, Stevenson, Buckle, Meredith and Pater, and even Spencer and Huxley—have run their swords, on occasion, through the grammar books? Simply because those grammar books, despite their wounds, still maintain a high credit. Simply because the grammarians, mistaking their task, continue to describe the English language, not as it is written, but as they think it ought to be written. Grammar, in brief, has ceased to be a deductive science and become an inductive science, based upon a host of gratuitous and indefensible a priori principles and assumptions.

The fact becomes more apparent when we turn from the written English of historians and essayists to the spoken American of the common people. There is no need to pause here to prove that the common people have a perfect right to speak any language they choose and to speak it, after choosing it, in any manner that suits their fancy. A language is not the master, but the servant of the people using it. They are free to change it as they please and as often as they please. Whether or not that privilege is exercised wisely is beyond the point. The essential thing is that it is exercised constantly. The common people, in 400 years, have changed the meaning of the word “villain” from “a servitor” to “a scoundrel.” They have exiled “gramercy” “odds-bodkins,” “sdeath,” “sounds” and a regiment of other expletives and adopted the simple and comprehensive “damn.” They have juggled the tenses and cases a dozen times and are still at it.

This constant change does not cause confusion. The people of any given generation always clearly understand the language of that generation. Novelties come in constantly, but they do not come in too fast to be readily assimilated. When an American of today says “I seen that I hadn’t oughtn’t to have came” he is speaking perfectly clear American, and every other American understands him at once. But the grammar books say that he is speaking nonsense. They demand that he speak, not American, but English—and not everyday, spoken English at that, but a purely theoretical English, encountered only in the most serious books, and then only rarely. Grammar, in brief, tends to lose touch with language. It becomes hortatory, hunkerous, doctrinaire. It condemns an American for saying “I will” instead of “I shall,” despite the obvious fact that “I will” is heard in America 10,000 times as often as “I shall.” As well might biology condemn the streptococci for not being protozoa!

What is needed, of course, is a new grammatical method—a grammar based upon deduction. Let us deduce such a grammar from the actual speech of the plain people, instead of trying—in vain! in vain!—to make them observe the rules of an a priori grammar which fits a language they do not speak and do not want to speak. An American schoolboy is taught that the word “ain’t” has no existence, and yet, on leaving his classroom—and even in that classroom—he hears every one using it. He is taught to say “I shall” and finds that the people he must live among use “I will.” He is taught that the form of “to eat,” in the past tense, is “ate,” and yet he always hears it “et.” He is taught that the plural form of the personal pronoun, in the first person, is invariably “we,” and yet the fair being he learns to love in later years always says “Us girls.” He is taught that “They don’t” and “It’s me” are scandalous, and yet he hears them every day.

Send In Your Specimens

Why keep on torturing this poor fellow? Why not make a deductive grammar of the language he actually speaks and hears spoken? Why not turn his energies to the mastery of spoken American, instead of wasting them upon a vain and useless effort to master theoretical English? I am willing to do my part in compiling this grammar, but I can’t do it all. The task is too great for one man. The mere labor of collecting materials demands the co-operation of many. Therefore, I invite contributions. Send in any specimens of spoken English that you may encounter—such things as “That’s the fondest thing I’m of” and “I have never saw nothing more better.” I shall print all truly novel and significant specimens—and then, some day in the future, it will be in order to analyze them scientifically and to deduce from them the noble rules which lie at the bottom of them.