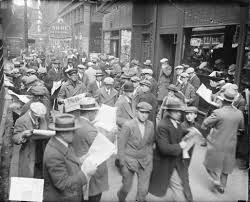 ‘Bore From Within’ Program of Action

Plans of the Communist and Communist Labor parties, against which the great raids by government agents started Friday night, to gain control of all labor organizations as the means of fomenting revolution were revealed tonight in documents made public by the Department of Justice.

Assistant Attorney General Garvan made public the documents which were seized in several cities, with the desire, he said, that “the American people learn the real purposes of these menacing groups and the nature of the poison they were spreading.”

Deploring the trend of development of trade unionism, the “manifesto” says:

“The older unionism was based on the craft divisions of small industry. The unions consisted primarily of skilled workers whose skill in itself is a form of property. The unions are not organs of the militant class struggle now. Today, the dominant unionism is actually a bulwark of capitalism, merging in imperialism and accepting state capitalism.”

The “manifesto” admonishes the followers of the parties that they “must actively engage in the struggle to revolutionize the trade unions.” It adds that as against the unionism of the American Federation of Labor, there is need for emphasis of revolutionary implications and that:

“We recognize that the American Federation of Labor is reactionary and the bulwark of capitalism.”

The Communist party members pledge themselves, the manifesto shows, to participate in all mass strikes, not so much to achieve the ends of the particular strike but to further its program of revolution. Complete capitulation by capital in all strikes is given as one aim, while collective bargaining or dickering of any kind between employer and employee has no place in the radicals’ scheme of overthrowing the present political economic system.

“The manifesto of the Communist International.” Which was made public as one of the documents subscribed to by both the Communist and Communist labor groups of this country, characterizes the League of Nations as “the cover under which the world capitalists prepared for their final battle.”

The League covenant itself is described as only “a deluge of pacifist phrase-mongering, a desperate effort made to pull together the tumbling capitalistic system.”

Action of the government in obtaining an injunction against the leaders of the bituminous coal strikes was employed by the Communist party heads as ammunition in their campaign, declaring that the capitalist used the government’s power, a weapon which the workers could not muster. This evidence is contained in a pamphlet printed within a few days after Attorney General Palmer had reached an agreement with officials of the United Mine Workers.